I don’t often do anything twice … so when I actually do something thrice (sure, that’s a word!), it has to be mind blowing.

My first Traffic and Conversion Summit (TCS) was in 2014 … I found out about it super last minute as it was already sold out. Luckily, I got my friends over at Infusionsoft to hook me up with a ticket since they were sponsoring. See why having a big network helps?? 🙂

But before I even got to the summit, I began my networking outreach. I knew there would be some amazing people I’d want to connect with and why not start at the top and connect to Ryan Deiss, CEO of DigitalMarketer.com.

… Here is the blog post I wrote a few years ago about how I networked my way into Ryan Deiss inbox.

For me, the Summit that year was life-changing. Truly. The education provided was top-notch and when I came back, I doubled my revenue. But as I predicted, even more valuable, was the networking.

I made sure to get some face time with Ryan Deiss, Perry Belcher and Molly Pittman (just to name a few). I was truly in awe of the entire team and just wanted to say hi! Had nothing to pitch, nothing to run by them and didn’t want to waste their time … But I was hoping they’d remember my smiling face and become a part of my journey – somehow some way.

2014 was super incredible and I was in love. Truly, I’m on of their biggest fans.

I went back in 2015, saw my friends, made new ones but walked away feeling a bit overwhelmed with all the information that was provided. At the end of the day, while I play in the digital marketing space because of my online/offline professional community, NetworkingPhoenix.com, I’m not as deeply involved in the digital marketing space as a lot of the people attending the conference who the information is geared towards.

Attending this year, I kept an open mind and told myself that even if I walk away with ONE new piece of information, it will be great.

BUT HOLY SHIT. This year, again, blew my mind.

Obviously, I wasn’t the only one that must have felt a bit overwhelmed by all the info because they created breakout sessions for different levels. They had things for beginners, agency folks, etc. TCS team – you guys killed it!

As some of you might know, I’ve been going through a lot of life changes lately and honestly, the summit wasn’t on my radar this year.

As I was working at my computer one evening, I got a FB message from Sean McDonald asking me if I was planning on attending TCS2017. 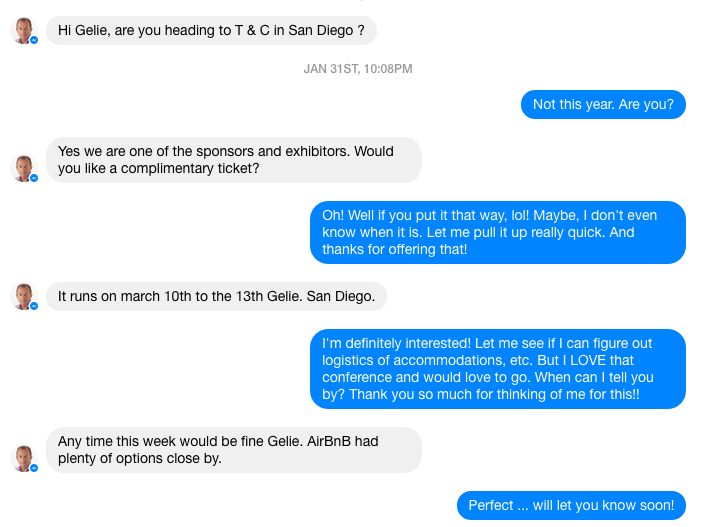 So who is Sean you might ask … well, I asked myself the same thing. Believe it or not, I get a lot of “random” messages like the one you see pictured up here, but most of them are not up my alley.

Sean happens to be the Founder and CEO of MOBIT, but more importantly, he’s now my hero 😉

Within 24 hours of him offering me the ticket, I had everything booked …

From the moment I arrived at TCS2017, held in beautiful San Diego, it was pretty much surreal.

“… the networking was out of this world.

All the top online earners were there having drinks, sharing information, and creating deals with each other. The crowd was super diverse, from e-commerce store owners, coaches, agencies, affiliate marketers, SaaS companies, and tons of other professions I had no clue even existed!”

I honestly couldn’t have said it better myself. Not only did I make some amazing new friends, but I got to revisit with all the “old” friends as well.

And it was great to see Phoenix’s own Christina Kehoe, Community Operations at Bevy, lead one of the breakout sessions. #yesphx

Interestingly enough, I’ve been writing open ended question emails for years now, so it’s great to hear validation of this.

So here is my goal for the TCS2018 … I’d love to run one of their breakout sessions that focuses on local communities. With 10 years of running an online/offline community of 40,000 professionals, doing a TEDx talk and being featured in numerous networking books, maybe they’ll consider me … 🙂

Let’s see if my networking skills will pay off on this one. Wish me luck!